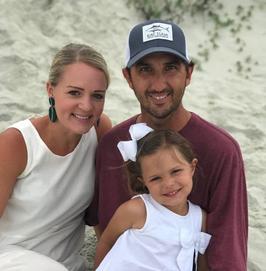 John grew up in Boca Raton, FL where he learned golf from his Dad attending the same Junior Golf Camps he now teaches himself.  After moving to Chapel Hill, NC with his parents and three sisters he played golf for Chapel Hill High School.  Then John played briefly for UNC Wilmington before transferring to North Carolina State and graduated with honors in Turfgrass Management.  After discovering his passion for teaching golf John went on to study under the best teachers in the country at the most reputable Golf Clubs.  These included his uncle Jeff Mory, PGA at Conway Farms GC in Chicago, Butler National GC in also in Chicago, Old Chatham GC in Durham, NC and Seminole GC in south Florida.  After teaching in Chicago for a private company John and his wife Lisa moved to Charlotte, NC and has seen his reputation as a teacher grow every year at Carolina Lakes.  In addition to becoming a reputable teacher John also has also become one of the top playing Professionals.  He has won multiple majors in the Carolinas Section (Head Pro Champ 2014, Pro-Pro Champ 2015), competed in 3 PGA Professional National Championships and even 2 Web.com Tour events.  When not at the golf course John enjoys hanging out with his wife (Lisa), daughter (Nora), friends and family. He also loves to go surfing, fishing, doing landscaping and watching other sports besides golf...particularly football and basketball.